As you may be aware, yesterday the Federal Reserve (“Fed”) cut the federal funds rate from 2.50% to 2.25%. I have been asked several times if loan rates will now go down as a result. The most likely answer is NOT materially. There may be some initial market overreactions causing short-term treasury rate declines, but these will most likely be offset by higher spreads.

Looking forward, however, is key. Examining why the Fed cut the rate along with some historical context may provide critical insight to prepare for potential future opportunities.

1) Now may be the absolute best time to borrow and optimize future leverage, and;
2) There will be an economic downturn, and while we do not know exactly when, we know there will be opportunities both prior to and during this event

The Fed rate cut impact on the 10-year treasury yield is minimal as the bond market expected up to a 50 basis point rate decrease. In the short term the market may overreact to news like today’s manufacturing output decline and tomorrow’s employment data. The Fed rate cut in the short term has the compounding effect on bad news. Had the Fed not cut rates, treasury yields would most likely have increased 15 to 25 basis points and spreads would have declined.

The Fed rate cut is the first reduction of the federal funds rate since the Great Recession of 2008. Of equal significance the Fed also announced yesterday that they would end the runoff (sale) of assets in their portfolio. Both changes reflect the Fed’s growing uncertainty with the direction of the economy.

After yesterday’s Fed cut, the stock market fell. The drivers of the stock market decline, uncertainty and volatility, also push credit spreads higher. During periods of uncertainty or turmoil, investors want bigger reward for greater perceived risk versus investing in US Treasuries (considered the safest). Most asset classes like corporate bonds and real estate mortgages often see rate increases especially when investors are fleeing stocks and buying treasuries (the flight to quality).

While we have not seen a significant rise in credit spreads yet, they are highly likely if recessionary worries continue to creep into the market psychology (this pushes treasury rates lower) . We believe this is a distinct possibility in the near future considering the presence of a few indicators:

• In 1995, 2001 and 2007 the Fed began cutting the federal funds rate. The Fed made it clear yesterday that future cuts are not certain, and it will react as it reads signs from the economy. Regardless, it is important to note that all recent periods of rate reductions by the Fed preceded a recession.

• Since the 1980s, every period of recession has also been preceded by an inverted yield curve. Attached is a chart showing today’s yield curve. The yield curve differential between the 3-month and 10-year treasuries is inverted as it has been since March 2019. This is not to say the yield curve alone predicts a recession. 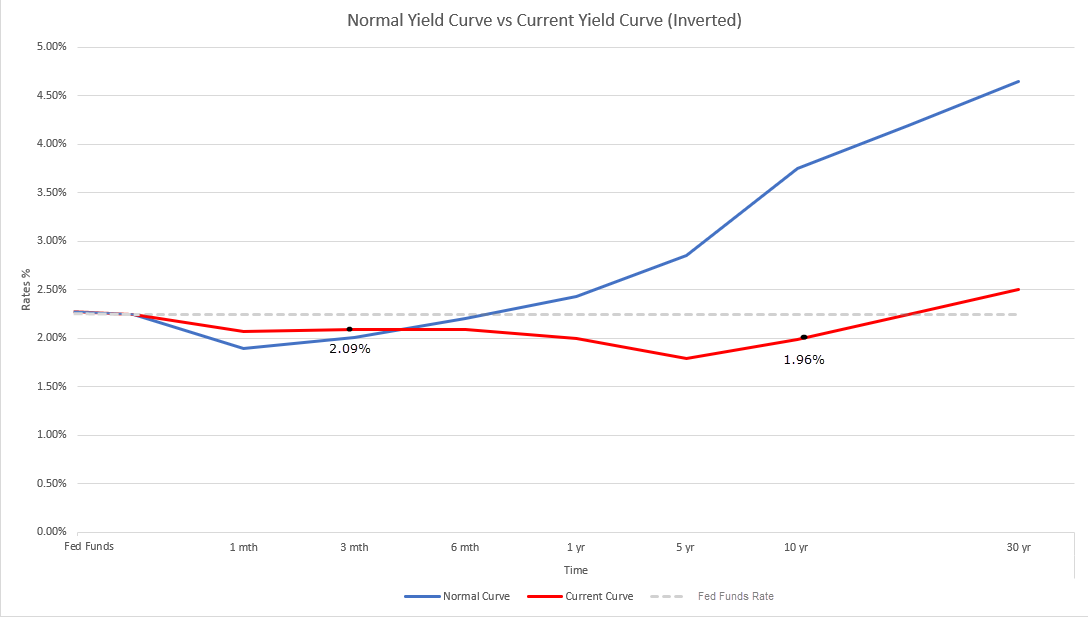 • Finally, the U.S. economy has grown for 121 consecutive periods following the Great Recession of 2008, making it the longest economic expansion in recorded history. Common sense and history suggest this expansion will not carry on indefinitely.

So, what does this all mean to you as a Borrower?

We believe a downturn is inevitable, we just do not know exactly when it will occur. We also believe it most likely will not be as severe as the challenges faced in the Great Recession of 2008. However, if it occurs it may extend for a longer period than experienced in the past.

The Fed’s monetary policy tools to stimulate growth are limited to lowering rates and buying assets to keep liquidity in the markets. At the onset of the Great Recession, the Fed funds rate was at 5.5%. To stimulate, the Fed lowered rates 10 times in 2007/2008 to 0.25% and kept the federal funds rate at this level until December 2015. Until yesterday the Fed had increased rates to 2.5%. At the same time, the Fed was also purchasing non-performing assets in the financial system in order to keep liquidity in the market. The Fed has far less room to move rates down today as they start at 2.25%. On the asset purchase front, at the end of 2007 the Fed’s recorded assets were at $800 billion, while today assets are at $3.8 trillion. Simple math shows the Fed has less room to cut rates and less capacity to buy assets in this current cycle.

We are not predicting a near term recession or attempting to time it. We are saying, however, now is the time to prepare! There is absolutely no downside to looking ahead and being prepared.

In periods of economic uncertainty, or recession, the availability of credit tightens, credit spreads widen, cash flows can decline, and asset valuations decrease as loan interest rates and cap rates generally rise. You do not want to be make crucial financing decisions during a recession, as options can be limited.

At present, the US economy’s strength is such that credit spreads have not yet begun to rapidly rise, and credit is still readily available, interest rates are near historical lows and the flat yield curve means borrowing longer term is often less expensive than short term borrowing.

Available data combined with the actions of the Fed clearly indicate a negative change could be on the horizon. Now is the time to consider refinancing loans that may mature in the coming years, as one does not want a maturity default because credit availability has contracted.

We strongly feel it is time to look at portfolios and carefully evaluate acquisitions. The current credit environment allows great opportunities to properly hedge and structure asset-specific debt to optimize current and future valuations and cash flows as well as to manage risks. Increases in mortgage spreads result in higher debt service payments and increases in credit spreads lead to higher cap rates and lower asset valuations. These impacts on late cycle, low cap rate purchases can be lessened by locking in future returns with longer term fixed rates.

The current credit environment also allows one to increase liquidity and lock in long term low interest rates supported by historically high cash flows. If a downturn occurs there will be many opportunities to acquire valuable assets at significant discounts. Having predictable portfolio cash flows and strong liquidity will allow our clients to take advantage of these opportunities.

Please call us to further discuss the current market conditions and to assist you with portfolio refinance and acquisition evaluations.